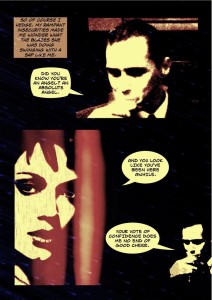 More and more we are seeing professionals use Comic Life to layout and letter their comics. It’s incredible to see our app in the hands of skilled storytellers, and it’s always a pleasure to get to know the writers and artists who use Comic Life for their projects. On that note, let me introduce you to Andrez!

The idea for the graphic novel has its origins in the novel “Tobacco-Stained Mountain Goat” that I published through Another Sky Press in the USA in 2011. That story was basically an homage to detective noir/pulp, set in the near-future, last-city-on Earth dystopia that is Melbourne. It’s very influenced by writers like Raymond Chandler, Dashiell Hammett and Philip K. Dick – along with old hardboiled detective cinema. 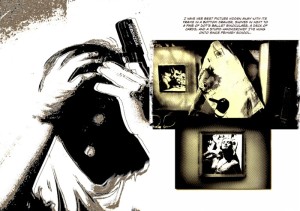 But I’ve been a comic book fan ever since I could first read, and have aspired to work with sequential art – as writer as well as artist – since high school. Luckily over the past three years I’ve been able to pursue this dream, and late last year the idea came to me to make a graphic novel out of “Tobacco-Stained Mountain Goat” since it’s so visually inspired.

The artist this time around is me, so this has made the process far more internalized, but I’m also able to work at my own pace and explore new ideas, especially in terms of taking it all into a more digital-oriented terrain.

Comic Life has been invaluable for me to explore this process, in terms of page lay-out and text, along with integrating my own art with “found” visuals and photographs. It’s also made the process far quicker and easier; this means I can focus on the art itself rather than spending too much time labouring over page lay-outs.