Well, there is a variety of “Firsts” we could be talking about, but this one is probably the most life changing. Everyone has a first experience with Comic Life, but not everyone documents it so well. Mr. Collins of Mr. Collins Math Blog wrote a wonderful post about using Comic Life for iOS.

Earlier this month I blogged about the iPad apps I was intending to use in the new school year. One of those apps that I was yet to download was ‘Comic Life‘ – an app that allows you to create your own comics!

Having seen a few people on Twitter tweeting links to their recently produced resources I was reminded that I should really look into getting the app. Check out the official Comic Life Twitter account (@comiclife) for loads of retweets from other teachers using the app. In particular I was inspired by @CreativeNorton and@CreativePhysEd. 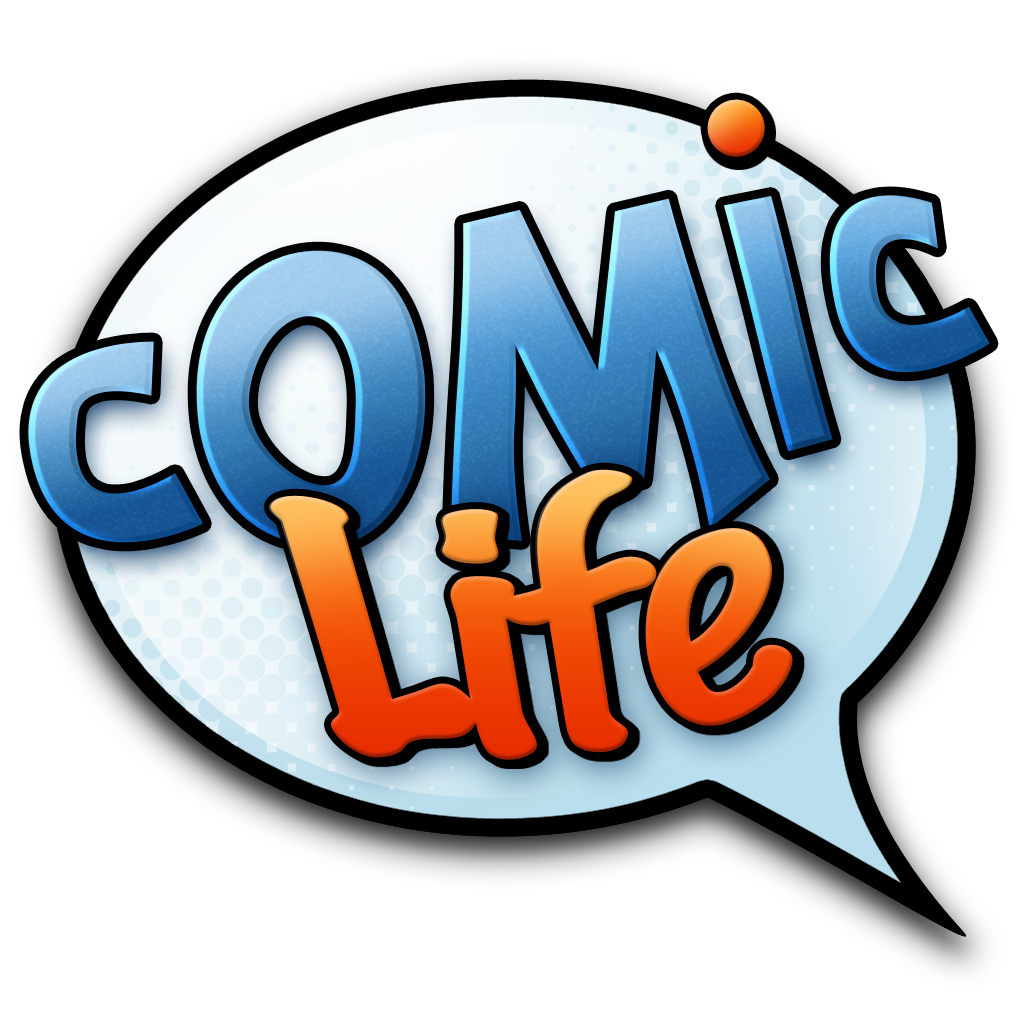 Before I downloaded (and bought) the app [currently £2.99], I checked out a few videos on YouTube as to what could be done and just to get a feel of how easy it was to create the comics. These were really useful and confirmed that I needed to get the app!

I also already had a reason to get the app – I wanted to create a poster for my classroom to go on my tutor noticeboard to remind my tutor group of the basic expectations in regards to their uniform, equipment and use of the school’s planner.

Once the app had downloaded I read the ‘getting started’ guide, which was brief and simple enough; it confirmed what I had seen on the YouTube videos. I tried, in this ‘comic’, to export it to see how I could then use the comics once created. I was extremely pleased at the ease of opening the comic in pretty much any of the other apps I already had downloaded. It opened in Dropbox as a pdf, which was exactly the thing I was hoping it would do, but didn’t have this confirmed in the app description on iTunes. It opened in Adobe Reader (obviously, as it’s saved as a pdf file). It also opens in ‘Skitch’ which then allowed me to add the effects in my 1st comic (see below).
There are plenty of other things you can do with the comics too, but for what I intend to use it for, the above is good enough for me.

Being a bit of Marvel/DC comic geek I opted for the ‘Retro’ template, of which there are about 10 to choose from. I changed the ‘template’ texts and re-sized/positioned them as I wanted. Adding photos from my photo library was so easy it meant I was able to spend more time getting the layout to look exactly as I wanted. The thing that impressed me most was that the photos, when inserted, fit to the bordered boxes. By this, I mean that if you have part of your photo overlapping the bordered boxes, after having resized your photo accordingly, the app automatically ‘trims’ the photo so all you see is the part of the photo inside the bordered boxes.
The speech bubbles are great too and there’s a wide variety of bubbles to choose from. I, by chance, came across the ability to add an extra ‘tail’ to the speech bubbles, meaning that more than 1 person could say/think things – I used this in my 1st comic (see below).
It’s really easy to change the fonts of texts and there’s plenty of comic type fonts and designs to play around with – great for the comic geek within.

There’s loads of features within the app that I am yet to use/explore such as the shapes, different layouts and templates you can use etc. 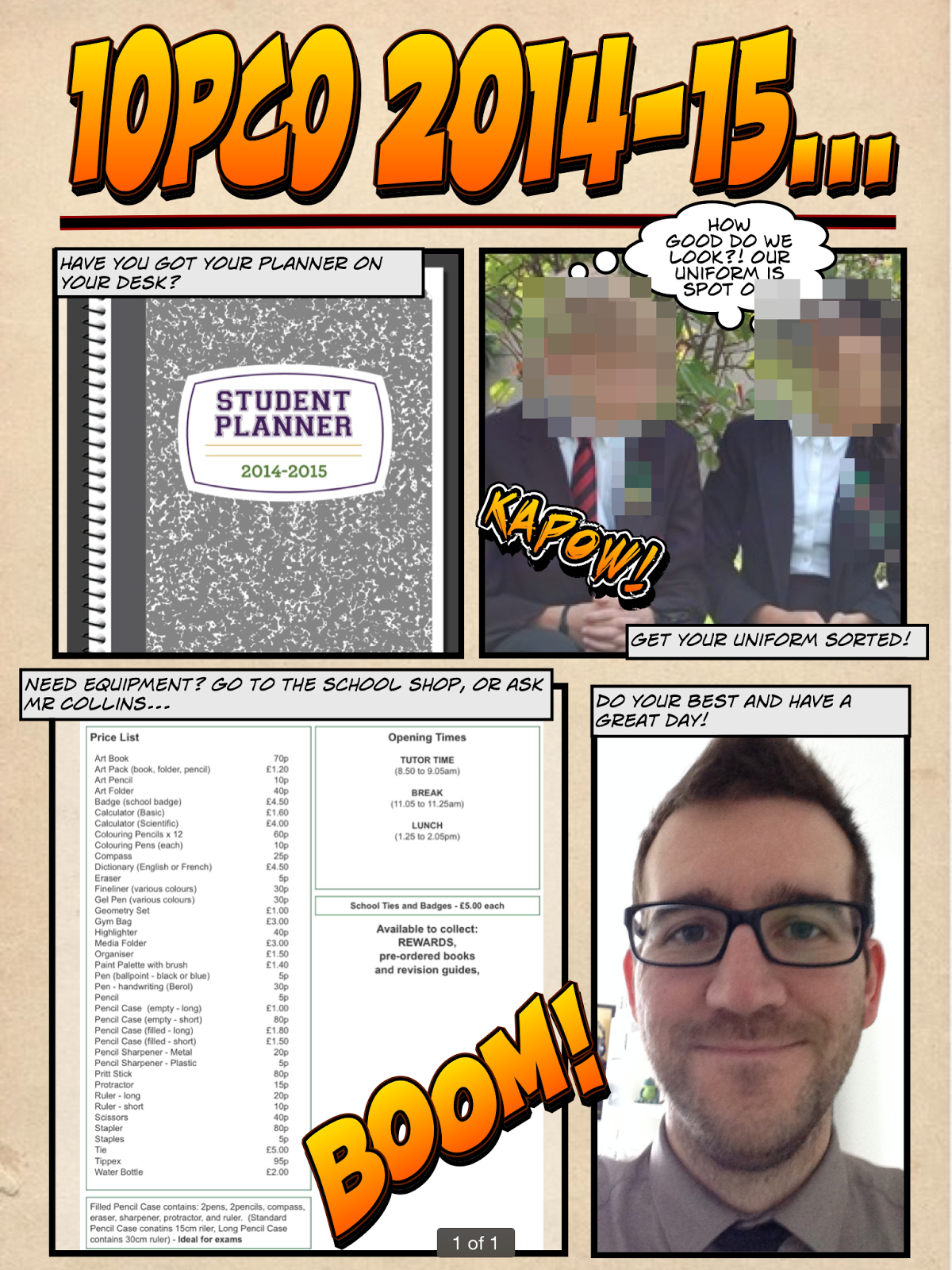 I used my ‘Skitch’ app to blur out our Head Boy and Head Girl and like the fact that I can open the comic in this app to tweak things where needed.

Yes, that is my gormless face in the bottom-right corner.

The main messages I wanted to get over to the students were to:
1) have their planner on their desk during tutor time (and in their lessons)
2) ensure they’re uniform is top notch (as modelled by our HB and HG)
3) ensure they have the correct equipment – prices from our school shop included here for their reference

I’m really pleased with how good the comic (poster) has turned out and am sure this will look great on our noticeboard. It’s bound to draw students’ attention toward it and therefore they’ll actually read it!

I want to create some comics/posters for topics like constructions. I would create step-by-step instructions to performing each different type of construction – perpendicular bisector, perpendicular to a point on a line, perpendicular from a point to a line, angle bisector, constructing SAS, SSS and ASA triangles etc. I think these would work great in the style above as students can read the instructions/follow the images to help them.
This may also work well with the transformations – enlargements, translations, reflections and rotations and transformations of functions for the higher ability students – y = af(x), y = f(ax), y = f(x) + a and y = f(x + a).

It could work for any topic really, but especially with those that lend themselves to being a bit more instructional and having to ‘show’/’model’ to students how to do/perform them.

I’m really impressed with the app and how straight forward it is to use. I look forward to creating more comics and will, of course, share them in due course…watch this space!