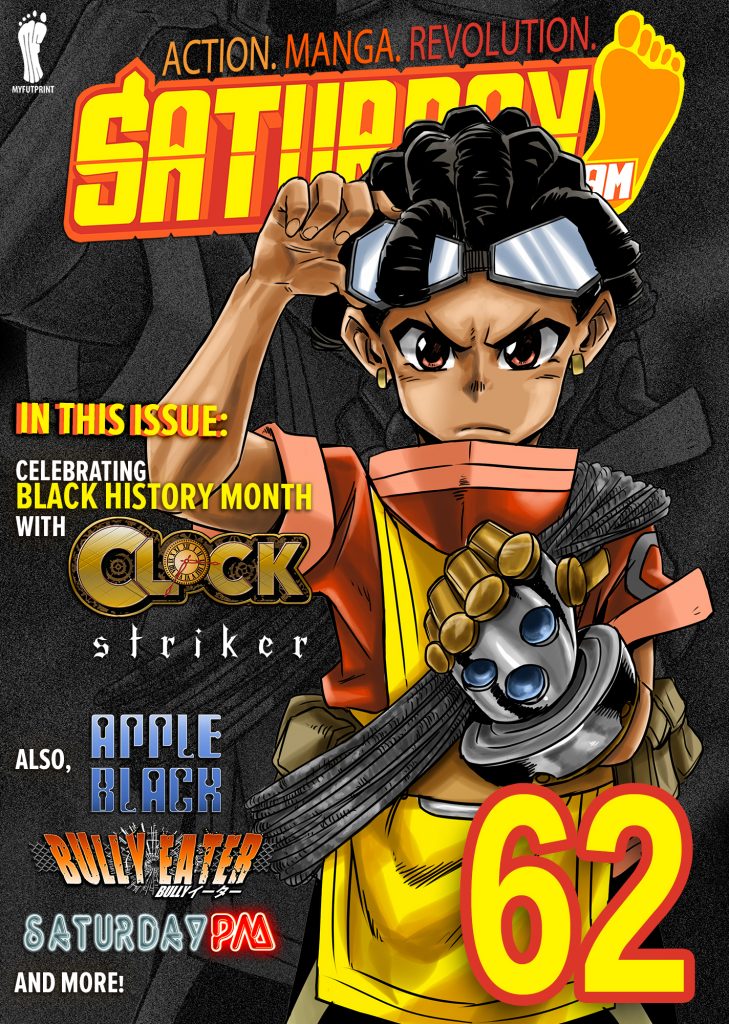 We caught up with the winning team of REKSE, the artist who brings the series to life visually, and Frederick L. Jones, Founder, Publisher of Saturday AM and writer/creator of the hit webcomic and posed some burning questions.

THE STORY IS ABOUT CAST, A 12 YR. OLD GIRL WHO DREAMS OF BECOMING A SMITH, PART-WARRIOR BAD-ASS, PART ENGINEER AND ALL-AROUND PROBLEM SOLVER. THE PROBLEM? SMITHS ARE USUALLY NOT WOMEN AND EVEN LESS SO YOUNG BLACK KIDS. SELECTED AS A STRIKER (APPRENTICE) TO THE ENIGMATIC PHILOMENA CLOCK, ONE OF THE RARE FEMALE SMITHS (AND CONSIDERED A LOOSE CANNON), CAST IS DETERMINED TO FOLLOW HER DREAMS NO MATTER HOW DANGEROUS THEIR ADVENTURES GET!

Frederick: As a kid, I created comics using my mom’s copy machine and would sell them to kids in the neighborhood. In fact, it was an anthology just like Saturday AM with comics that I and a few other kids would create. Now, they weren’t great – I mean, the speech bubbles in particular just were horrid hand drawn, and degraded due to the copier machine but they were cool to do. 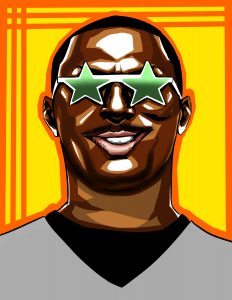 So, I’ve always wanted to create comics and in the mid-2000’s, I could see the disruption coming from social networks and global digital distribution. I felt that I could recreate that experience on a more professional scale, with talented DIVERSE, artists from around the world.

Once I took a break from my time in the videogame industry as an Executive, I really wanted to try my passion for comics and decided to go for it in 2011. We ultimately assembled a team and launched Saturday AM in 2013.

Q2. What is it like to work with creators from all over the world like Whyt Manga, Andrea, Raymond, Rekse, Jaime and the rest of the Saturday AM’s content creators? 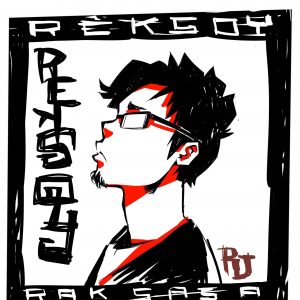 REKSE, artist who brings the series to life.

Frederick: FUN! It really feels just so FUN, kind of like when I was a kid working on my poor man’s comic anthology with kids in the neighborhood. I tell people that one of the things I’ve truly enjoyed about this is that we GOT SO INCREDIBLY LUCKY. I mean, there’ve been many groups who’ve attempted to do what we do but one of the key reasons we’ve succeeded has been that we have not just great creators but the commitment and professionalism of the team is simply the the best! We laugh so much and inspire each other so much that I think that when the going gets rough our folks never let the obstacles and setbacks hobble us.

Q3. Why did you create the 2nd flagship title and mega-hit Clock Striker that is serialized in Saturday AM?

Frederick: One of the core missions of Saturday AM is to bring more diversity to manga webcomics. Being a person of color, I think that as much as Hollywood needs to diversify and use their powerful ability to reach people and change their perceptions of environments and the people who inhabit them – so too does the traditional manga/anime aesthetic need to evolve. I don’t buy the argument that because it’s Japanese it doesn’t have to reflect the world – my family supports the livelihood of those creators!

So, I felt the best way to help usher in the change I wanted to see was simply to do it and thus we created many series with diversity from Monster Society of America to Massively Multiplayer World of GHOSTS but our biggest hit so far was Clock Striker. That’s she a young black female is important but that she is a determined problem solver who LIKES helping people with science and math I thought was a really important concept. I’m really pumped that it has become so popular.

Q4: What kind of digital equipment do you guys use to produce CLOCK STRIKER?

Frederick: One of the reasons I felt secure in starting Saturday AM was that digital was now strong enough to make a huge difference in the costs for both distribution and production. I was already a user of Pages, Google Drive, and Dropbox so I knew I could transfer data and communicate with my team of artists and staff. 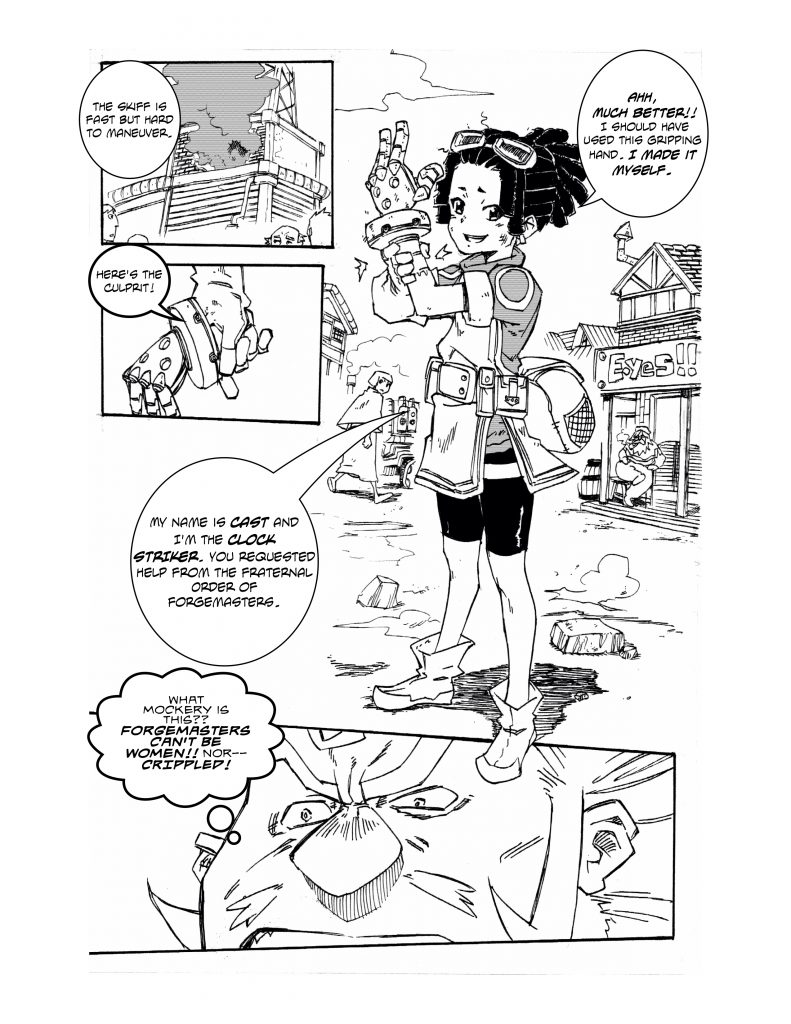 But, and this is a big one that I think too many young creators miss, is that just because we CAN create and share comics doesn’t mean that we can do it professionally. I needed to find additional and affordable tools for lettering and distributing comics. I knew of Adobe’s products but they were too expensive for a group of creators who may not all have the same computing setups.

I was determined to do a lot of the post production via mobile device ala iPad which was easier and cheaper and when I discovered the Comic Life app for iPhone and iPad it was literally life-changing. I mean, the apps are priced at $4.99!! I was and still am a loyal user!

REKSE: For me, I used to draw pages traditionally. In fact, Clock Striker in Saturday AM issues 55-60 are all traditional. I finally started to get the hang of using digital and the next issues were all drawn in my Laptop. In regards to IPad, I would certainly try to draw on it if ever I had one. I often see one of my artist friends on Facebook using it and they seem to like it so I’m definitely interested.

Q5: REKSE, Cast is SO EXPRESSIVE! Even without the speech bubbles it’s easy to tell just what she is thinking. How do you approach her personality and what is your process for producing CLOCK STRIKER pages?

To be honest, when it comes to drawing, I really like to practice just making different kind of faces. Even when I’m not drawing manga, sometimes I’ll just ‘people watch’. Y’know, sit in front of a mirror and make funny faces or maybe go out in a mall and sit in a café to study and draw people. With that training, it really helps me view different kinds of character personality.

Also, what helps is the influence I get from watching and reading manga. When I draw Cast, I usually think of her as something like a little Nami (from One Piece by Eiichiro Oda). Y’know she’s just awesome in her own way. Like, she’s only 12 yet she still kicks bad guy’s butts! Combine that with her intelligence and interest in machines and it just makes her such a cool character and I love drawing that side of her personality. 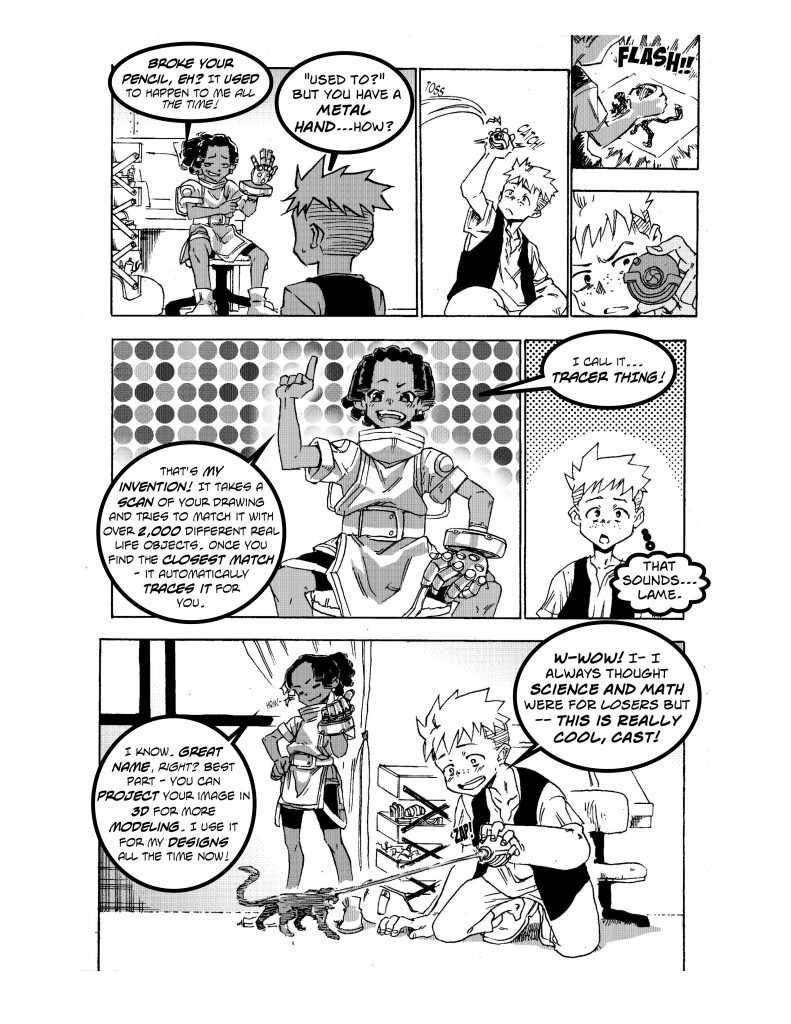 Ok, so as for my process, it goes like this: script > draft > Lineart > tones. The moment I receive the script, I study it and then look for some references for things I may not know that well. After I have a stronger understanding of the script, I try to play it out in my imagination so I can see how it will go when I draw it in the drafts. After those brainstorming sessions (including chatting with Frederick if needed – he gives me a lot of latitude) I then proceed with drafting the pages. This is where I take my time on sketching scenes. After that I go into the lineart and then finally toning.

Since the speech bubbles are created by Fred in Comic Life, I really have no idea what all of the characters are actually talking about aside from what’s stated in the script. The best feeling here is that I’m done drawing the pages, hahaha! No joke, I usually work from midnight to morning and whenever I’m done with all the pages I just sleep right away. Although when the Issues are released that’s where I feel satisfied with the outcome! I love the surprise of reading the finished story which is always really good!

Frederick: It’s SIGNIFICANT! Let’s go back and look at the cost factor which I talked about before. Again, if you want to make money on your comics then you have to have balance between your time and your costs to produce the comic vs. what you can get back. 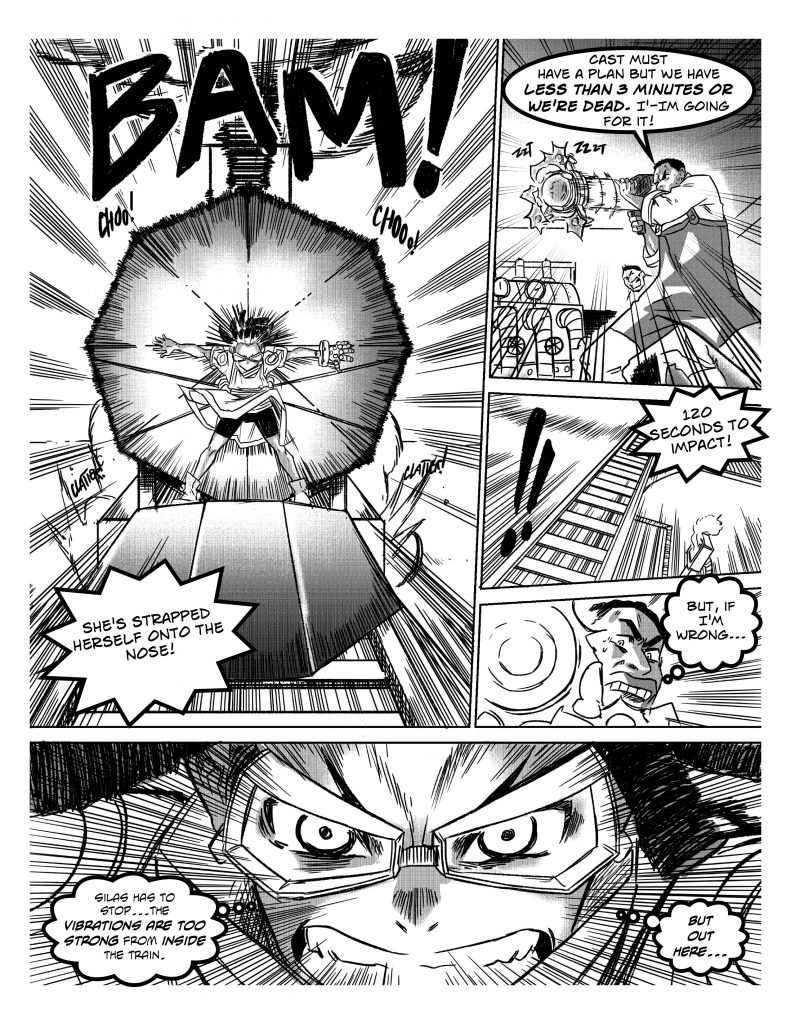 So, having an app that allows me to load in my finished art from REKSE and use it on mobile devices is a huge deal for me. Obviously, the software works and that’s the main thing.

COMIC LIFE has tons of sfx, good fonts, and speech bubbles to choose from which means the pages are always lively and diverse and look great!

Lastly, if there is ever an issue grammatically I can easily move the files to and from my designer for fast edits thanks to the app’s sync features with cloud storage systems like Dropbox. Again, if you’re in the BUSINESS of creating comics that’s A LOT of capability for the cost.

Q7: What do you hope CLOCK STRIKER will achieve in the next 12 months? 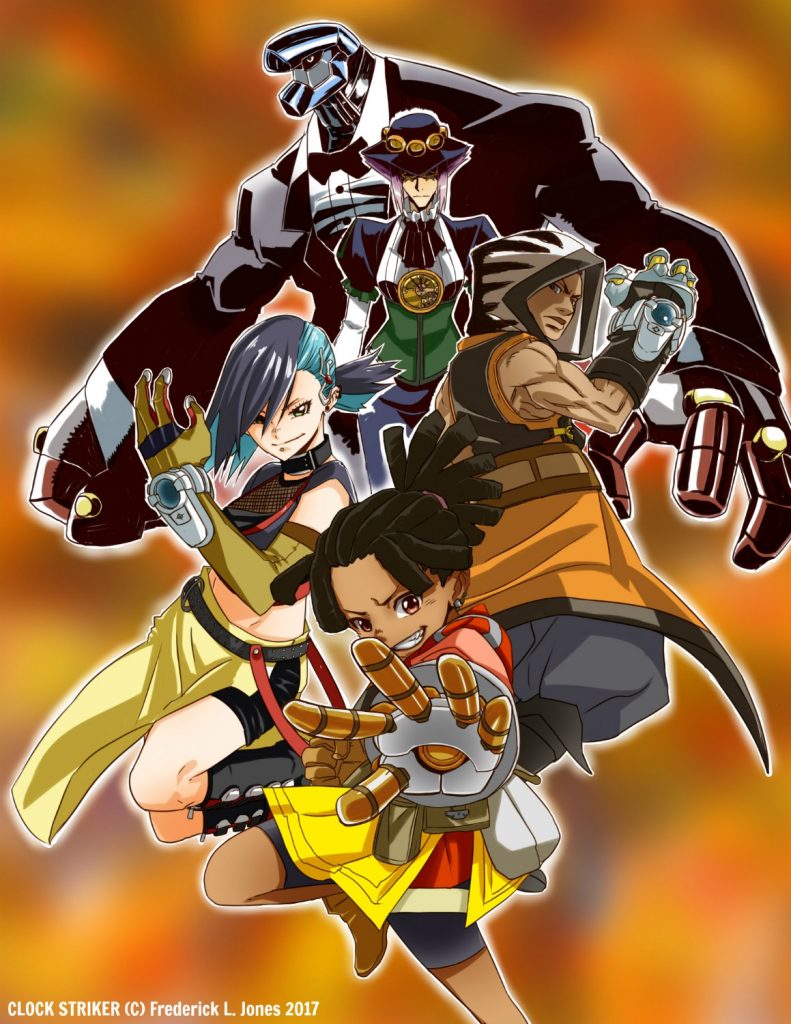 REKSE: I really hope the series will get BIG and well-known to the mainstream comics industry! I’d love it if there would be an anime of it one day which would really make us creators happy. My art is still evolving. I’m still trying to learn different techniques in drawing manga so, maybe by next year my art would be strong enough to be mistaken as being drawn by a Japanese artist, hahaha! No, seriously, that would be really AWESOME if someone were to think Clock Striker is created by a Japanese manga-ka.

Frederick: I certainly second all of REKSE’s thoughts although as the head of Saturday AM, I also have to be the one to make those deals happen (sigh). That said, we have already had talks so we may announce something on CLOCK STRIKER and other Saturday AM properties this or next year. What I CAN state is that CLOCK STRIKER Vol. 1 will be available for pre-order if not available to buy by end of this year. That’s a promise!

Check out the official CLOCK STRIKER home to read the original pilot chapter. Want more CLOCK STRIKER? All-new adventures are serialized in issues of Saturday AM – Subscription is only $5 a YEAR!